Four Men of Peace and an Episcopalian 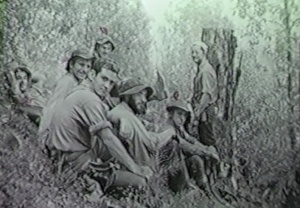 Four Men of Peace and an Episcopalian intends to preserve the memories and histories of five of the 12,000 religious conscientious objectors who served in some of the 151 Civilian Public Service (CPS) Camps located across the United States during World War II.

Civilian Public Service was a program created before the war and funded by the Historic Peace Churches, including the Quakers, the Mennonites, the Brethren, the Amish, and the Hutterites. It was agreed to by the Selective Service, as an alternative to jail for religious conscientious objectors (COs) to World War II. Conscientious objectors had to be supported by the views of their church and its hierarchy to qualify for the program. Non-religious COs were not permitted to take part in CPS and could still be sent to jail for refusing to serve in the military.

Eventually, the U.S. government took over management of the program, although it never funded it. A dubious points system determined how long participants were required to serve in CPS. Some conscientious objectors were even kept in the camps long after World War II had ended. Interestingly, though prisoners of war were paid, religious conscientious objectors working for CPS were not.  They received only a five-dollar stipend per month for stamps. Any money the Civilian Public Service program earned by work the men did was also not allowed to be used by the military. It was held by the government and later mysteriously disappeared. Very little, if anything, has been taught about the history of Civilian Public Service to the general public.

To document and share this lesser-known aspect of World War II history, the Four Men of Peace and an Episcopalian oral history collection was created in the early 1990s in California and Philadelphia. While four of the interviews were originally used for a university project, all are now being made available to historians and the general public through various ways, including the National Home Front Project. These five featured conscientious objectors served as fire-fighters, carpenters, road builders, tree planters, loggers, radio operators, surveyors, and in many other roles in the camps. Two worked in mental hospitals. Two of these men were used as human guinea pigs for medical experiments, including the Minnesota Semi-Starvation Experiment. All went on later in life to serve their communities as men of conviction, compassion, and peace.

Dorothy’s interest in Civilian Public Service began as a child, when she listened to many heated discussions about CPS between her father, Virgil Nichols, and her uncle, Malcolm Nichols. Because of his hearing disability, Malcolm had been classified as 4-F and would have never been chosen to serve in the military. However, he was required to serve in Civilian Public Service simply because he chose to register as a religious conscientious objector. On the other hand, Virgil served in the U.S. Army. And each believed they had made the better decision.

Dorothy later researched Civilian Public Service at various archives in Washington, D.C., at Swarthmore College’s Peace Collection, and at the American Friends Service Committee in Philadelphia. She also retained all of her uncle’s letters and documents that he carefully preserved about CPS during and after his detainment. Her resulting oral history project includes interviews with Methodists James Dyer, James Griffith, Robert McCullagh, Malcolm Nichols, and “the Episcopalian,” Lawrence Miller.

For more information about the Four Men of Peace and an Episcopalian oral history collection, please view the documentary below or contact Dorothy Nichols at mlsanddjn@aol.com.