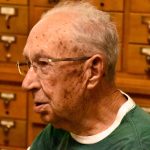 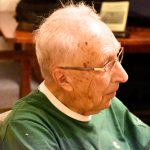 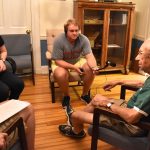 There was scrap metal drives; I was in the scrap business. A lot of people never did what I did, but when you’re poor, you hustle anything. I guess I was a hustler. Because what I did, I went around and collected scrap paper, anything in the way of scrap. And I had a wagon like an old Radio Flyer. And we had in the back of our house, we had a two story barn back there. And I would take it back there and store it, and any other scrap metal I could pick up. And every so often, the buyers would come by and they would come and stop there and I would sell it to them. Maybe you would get 25 cents, maybe a hundred or something like that. But when you don’t have any money, you couldn’t go to mother and say “give me a dollar.”

I went out and hustled to get it. Knocked on doors, asked people for it. So I’d collect it. And a lot of people [weren’t] collecting it themselves; they didn’t want to be bothered with it. They’d give it to you.

They knew I was, I assumed they knew I was selling it; everybody was. There were other people bigger than I am who had a scrap business. We lost a lot of things to the war that were metal that were scrapped that we could have kept: a lot of wrought iron fences and doors and things like that, and a lot of automobiles that went to the scrap that antique automobile people would love to have.