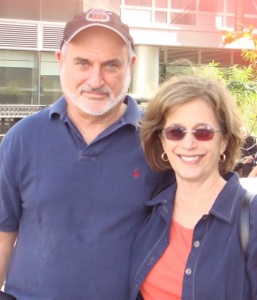 The Upper West Side Seniors project is a community initiative undertaken by residents in Manhattan, New York, that began in January 2019. As members of the Bloomingdale Aging in Place group, the project’s interviewers have access to local retirees who have memories of World War II in New York and across the country.

Lo-Yi Chan was born in Canton, China, in 1932. Fearing a Japanese invasion of southern China leading up to World War II, his parents initially fled to Honolulu, Hawai’i. There, they experienced the bombing of Pearl Harbor in December 1941. Concerned about the new possibility of a Japanese invasion of Hawai’i, the family once again […]

Bruce Craig was born in 1938 in Chicago, Illinois, the eldest of four children. Soon afterwards, Bruce’s family moved to Wilmette, Illinois, where they remained during World War II. They subsequently moved to Green Bay, Wisconsin. During the war, Bruce’s father worked in retail at the department store, Carson Pirie Scott & Co., and his […]

Robert Lichtman was born in 1933 and spent his early years living with his parents and maternal grandmother in a small apartment in Bensonhurst, Brooklyn. His father, who was in his 30s, was exempt from military service during World War II as the head of the household. Fortunately, they had no immediate family who were […]

Geraldine Schneeberg was born in 1927 and raised in Philadelphia, Pennsylvania. Her father was a manufacturer and her mother served as a community activist who sold war bonds. Gerry was the oldest of three children and a teenager on the home front during World War II. Her only family member directly involved in the conflict […]

Steve Schrader was born in 1935 in New York City. His parents had immigrated from Poland in the 1920s, and he grew up with a brother in the Manhattan neighborhood of Washington Heights, which was largely Jewish at that time. His father ran a dress contracting plant and the family’s economic circumstances were secure during […]